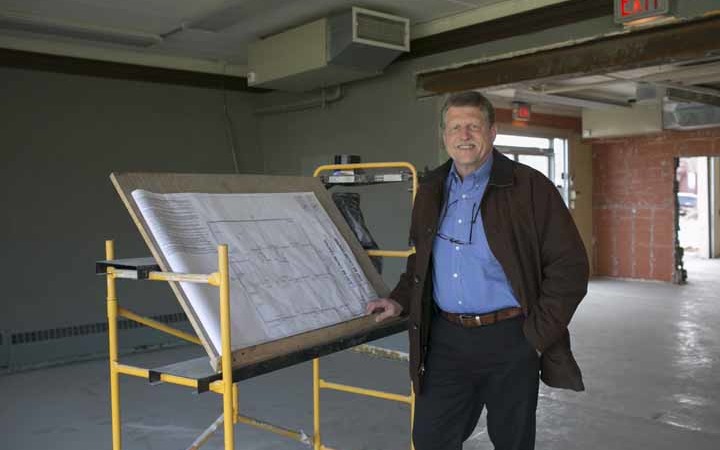 Just Be Cause Center

To say that Judy Dietz made an impact in the Ithaca community would be a vast understatement.

Serving on many local boards and committees, Judy volunteered her time in countless ways, working to ensure those who could use a hand got one. When she passed away in September 2012, the loss was felt throughout the area.

To honor her spirit, her husband, Jerry Dietz, is creating a place for non-profits to call home, in the vein of what the Women’s Community Building once offered (before it was demolished to make way for the Ithaca Neighborhood Housing Service’s Breckenridge Place project).

“The idea of a not-for-profit center is one I’ve had for a few years, when I knew the Women’s Community Building was going to be demolished and turned into apartments,” said Jerry Dietz. “I recognized we would be losing a place that provided that sort of a venue and resource for non-profits. It was very much a community building.

“The impetus for this happening now is very personal,” he added, acknowledging his wife’s passing and noting that she served as president of the Friendship Donations Network Board of Directors. “It was Judy’s wish that Friendship Donations Network could have a place to have all of their operations. When she passed away, myself and her brother and two sisters thought this would be a good opportunity to put a roof over FDN’s head, so to speak. I decided to marry that with the idea to replace the Women’s Community Building and that’s how this came about.”

Located in the former Ithaca Paint & Decorating building at 1013 W. State St. in Ithaca, the Just Be Cause Center is expected to open in June. It will be used by Friendship Donations Network, Running To Places, Mira’s Movement, Ithaca Public Education Initiative and the Kitchen Theatre.

When the extensive renovation of the 5,100-square-foot builing is completed, there will be five office spaces, a conference room and two multi-purpose activity rooms. It also will have new bathrooms, a kitchen, Wi-Fi and shared office equipment.

“The building is full, every space is spoken for,” said Dietz.

Friendship Donations Network will have its offices at the center, Running To Places will use it for rehearsal space — as will the Kitchen Theatre — and IPEI and Mira’s Movement will have offices there as well.

The name of the center stems from a party that Jerry and Judy hosted on July 29, 2012, for their friends — just because. The party, Jerry said, was planned during one of the couple’s four-hour drives to Sloan-Kettering Hospital in New York City where Judy was receiving care.

“It was meant to be a party to bring our friends together,” Jerry said. “Judy’s illness had prevented her from seeing people, she hadn’t been feeling great and it was a rough summer.

“It was the day before her birthday, her birthday was on the 30th, and she didn’t want to call it a birthday party,” he added. “So, we told people we were having the party ‘just because.’ For many people, it was the last time they saw Judy, certainly any semblance of a healthy Judy.”

After her passing, Jerry and her family were remembering the party and decided they should have a party every July to honor her.

“We were talking some more and someone said, ‘Judy would love it if that party was a fund raiser. It would be terrific if it were a fund raiser for a different local cause every year,’” Jerry said. “It really went from there, the name of the center came from the ‘just because’ party, altered to ‘Just Be Cause.’

“And, in fact, we will be having the first annual party on July 28 this year. Two-thirds of the proceeds will be going to Loaves and Fishes, one-third will go to pay for the expense of running the Just Be Cause Center,” he added. “We hope this will become an annual event, with two-thirds of the funds going to a local cause and the remaining one-third to run the center.”

It is Judy’s memory that Jerry is trying to capture with the creation of the center and the party, and he reflected on the message received at her funeral.

“At Judy’s funeral, hundreds of people came out and as people spoke about her, there was a real feeling from them they just didn’t know how much she did and how involved she was,” Jerry said. “I’m always trying to tap into that energy, I want to engage people in that way.

“Nobody wants it to be maudlin, I want it to be positive,” he added. “The building will be dedicated to Judy’s spirit, to her spirit of caring about people and making sure the community is a better place to live in.”